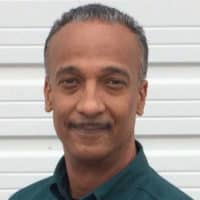 David Parramore was born into a military family. Although born abroad, he spent the majority of his childhood in San Antonio.

David followed in his family’s tradition of military service and joined the US Navy immediately after high school. David spent a number of years overseas and completed his final military tour at the south Texas U.S. Naval Aviation Training Facilities.

David is married to his lovely wife and their children have blessed them with many grandchildren.

When David fulfilled his military bid, he stayed in the aviation industry and worked in aviation maintenance.

David was looking for a change and attended the SMU network engineering track. Thereafter he was awarded an application analyst position for a little over three years. In August of 2003, David joined the AAA AUGER Plumbing Services team as a Service Writer. He initially regarded his new position as a transitory stop on his career path but quickly became enticed by the camaraderie and culture he had discovered.

After his children were grown and out on their own, David accepted a Dispatcher position. In his new position, David thrived in the semi-chaotic environment which can challenge even the most attentive and committed person. Soon thereafter, David accepted a management position and today serves at the Office Manager for the San Antonio branch.

In David’s leisure time, he enjoys spending time with his family (especially his grandchildren), listening to music, working as a volunteer with local youth organizations, watching movies and playing guitar at his family church.

David has been a staple of our AAA AUGER Team for many years. We are very fortunate to have this “Go-to-Guy” on our side.