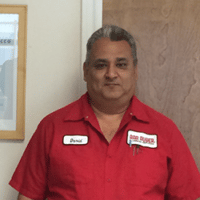 David began working for AAA AUGER in August of 2000. He was born and raised in San Antonio but moved to the Dallas area when he was a freshman in high school and has been here ever since.

David is often referred to as Dr. Ivins around the shop due to his ability to diagnose and repair seemingly anything plumbing related. David says that getting to help other people is his favorite aspect of his work.

David is a father of 3 children and enjoys working on cars and motorcycles in his free time. David is yet another example of why AAA AUGER Plumbing Services is among the best!