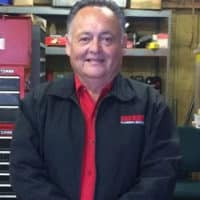 Edward started working with AAA AUGER in 1999 after leaving Olmos Equipment Company right next door to the San Antonio shop. Lucky for us.

Edward assures that our fleet stays afloat with little or no down time. His conscientious efforts have not only helped the San Antonio shop, but the other sites as well.

Edward was born and raised in San Antonio. In High School he studied to be a machinist, but worked part time at a service station as a mechanic.

Upon finishing high school, Edward joined the Army and served in Germany for three years as a fleet mechanic. When he finished his tour, Edward came back to San Antonio and started working with Gebhardt in the food processing and canning business. While there, he worked in the maintenance department and performed many services keeping the equipment and plant in peak condition. Several years later, Edward went to work for Mrs. Baird’s Bakery as a fleet mechanic and driver. He worked for Mrs. Baird’s for thirteen years before starting with Olmos Equipment.

Edward is key to the operations of our team. Not only does he service our fleet and equipment, he also is our Hydrojet specialist. Edward assists with nearly every high profile hydro-jet job where he provides on-the-job training to our field staff.

When he’s not working or called for a HydroJet service on the weekend, Edward likes to barbecue and entertain family and friends while watching the Spurs or a good prize fight.

At AAA AUGER, we have many fine people working behind the scenes to assure that your plumbing problems can be addressed professionally, reliably and affordably. There is no one better to exemplify our behind-the-scenes “Go-to Guy” than Edward Amezquita; yet another reason why AAA AUGER Plumbing Services is great!

Edward, after 20 years of employment with AAA AUGER Plumbing Service has retired. He will forever be part of the AAA AUGER family!