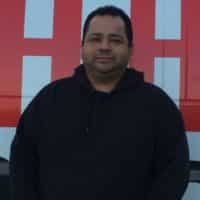 Jesse Ortiz has worked with AAA AUGER Plumbing Services since 2001. When Jesse was 16 years old, he started working summers with Ashley Plumbing fulfilling orders in their warehouse. In his senior year of high school, Jesse was in the work/study program with Ashley until his graduation when he started working full time. Jesse became knowledgeable in reading plans as he put together all the materials needed for each house and pursued his Journeyman’s license. It wasn’t long before Jesse started working in the field where he became one of the top plumbing installers for the company.