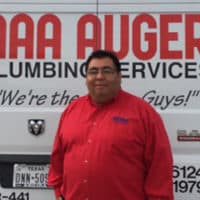 Jesse has been on the AAA AUGER team since 1996. He began his employment as a plumber apprentice. Jesse looks back to his second day of employment in the plumbing industry and shares, “Back when I started, I was sent to assist a drain tech on a sewer repair. The technician picked me up, drove me to the jobsite and dropped me off and told me to dig up the 6” sewer line in the back yard. Let’s just say digging in the sun in the summer for the first time wasn’t fun and made me sick to my stomach. I walked to a pay phone and told my wife to call the shop and give them some kind of excuse so I can be sent home. I left that day not knowing if I was going to return back. That same night we went to visit our daughter, who had been in the hospital for a month since she was born 8 weeks premature when it hit me. There holding my baby girl is where I got my inspiration to become a great provider for my family. So the next day I got my self back to work determined not to give up.”

Jesse’s determination and solid work ethic lead him down a very rewarding career path. It was not long before he learned to service drains and was responsible for operating a departmental service truck. After four years of apprenticeship, Jesse became licensed as a Journeyman plumber. However, within a few years thereafter, Jesse believed that he could inspire and lead our crews which led him to pursue a supervisor role. Jesse learned how to logistically manage operations as he became the shop’s number one dispatcher. Within a few years, Jesse would serve as an Office Manager and was ultimately promoted to serve as our Quality Control Manager and Plumber Trainer. In June of 2015, Jesse was promoted to Field Operations Manager and is charged with leading the Field Operations.

Jesse has been an integral part of our success, not just in San Antonio, but in all of our markets as he has assisted in training personnel from all of our shops. When asked what he likes best about AAA AUGER, he replied, “In my many years of employment, there have been many ups and downs, but I know that I have given blood, sweat and tears for this company only because I love it and enjoy being part of the family, especially a family that cares and loves you back.”

Jesse, we do love you back! Thank you for all that you do for the AAA AUGER Plumbing Services Family.