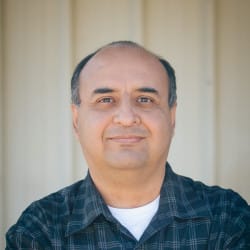 Manny began his career with the US Air Force serving two years in Germany and a year and half in South Carolina. Upon leaving the Air Force, Manny worked in the civilian aviation sector for about eight years, traveling to Italy and various states in the US.

Manny eventually decided to change career paths and pursued his BBA in finance from UTSA. Manny joined AAA AUGER Plumbing Services in March of 2010 as a Staff Accountant where he is charged with processing accounts payable and monitors the procurement of fixed assets and other job related expenses. Manny has also demonstrated an aptitude for IT systems and willingly helps out with troubleshooting issues from time to time as needed.

When Manny was asked about what he most enjoyed working with AAA AUGER, he stated, “I enjoy the friendly banter with my co-workers and plumbers, especially around basketball and football season.”

Manny does a fantastic job monitoring the Company’s spending practices, and we are glad that he is part of the AAA AUGER corporate team!