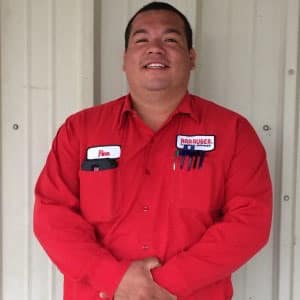 Ruben Rea first began his employment with AAA AUGER in April of 1997. Ruben came to us after working two years as a dishwasher for Shoney’s Restaurant. At that time, Ruben decided that he needed to pursue a different path and sought employment with us after learning about us from his cousin.

Ruben started as an apprentice and also decided to pursue his GED. After four years, Ruben became a licensed Journeyman Plumber and worked with AAA AUGER for two more years. Shortly thereafter, he and his cousin started a plumbing business together. During this time, functioning as a managing partner, Ruben learned about the many challenges small businesses face. He remained resolved, but after eight years, decided that he preferred a more stable path to success. He sought employment from another company but was not satisfied with the opportunities afforded to him.

In 2011, Ruben embarked upon his second opportunity with AAA AUGER. Ruben believed that with his decade long experience as a licensed plumber, that he had procured the skills to be among the best. Ruben’s attention to detail, outgoing personality and professionalism have propelled him to the top of the class.

On the personal side, Ruben is married to his lovely wife Linda and has four daughters, one of whom was recently born this May 2015.

We are very fortunate to employ some of our industry’s finest. Ruben’s sense of humor is only second to the smile that graces his face near every waking moment. Ruben is also one of the most generous and appreciative people you will meet. It is not uncommon for Ruben to provide impromptu cookouts for the San Antonio Shop.

Ruben Rea, yet an another example of what makes AAA AUGER the “Go-to Guys!”