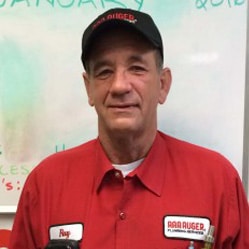 Ray Fewell is a second generation plumber (as he explains it) who worked with and learned from from his Dad since he was old enough to carry cast iron pipe. After growing up in the industry, Ray received his Journeyman license in 1977.

Ray initially worked in the construction industry, both residentially and commercially. Ray performed numerous renovations, among those are the The Guenther House Hotel in downtown San Antonio and The Valencia Hotel (which spanned a full year).

In January of 2004, Ray joined AAA AUGER Plumbing Services and has done an incredible job ever since. According to Ray, “I started here back when our COO had begun his career with AAA AUGER as a Business Manager. I am grateful to him and AAA AUGER for the many years of opportunity they have given me. I look forward to many more.”

In his off time, Ray is active in his Church and loves to spend time fishing.

We are so very fortunate to have one of our industry’s best on “Go-to-Guy” roster!

A huge congratulations to RAY! After 15 years with AAA AUGER and over 40 years in the plumbing industry, Ray has opted for retirement! God Bless Ray! Thanks for the many years!