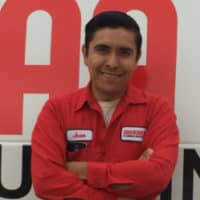 At 16 years of age, he started working as a roof installer. In his 8 years in the roofing business he became certified in TPO and sheet metal manufacturing. Due to dwindling opportunities in the field, he pursued a plumbing career.

In 2008, he worked for City Plumbing Co in Laredo, TX. He served as an apprentice for 6 years while developing his many plumbing skills. He learned to read blueprints, rough in major jobs, and operate various machinery.

In 2013, Juan decided to pursue his license. He attended the requisite prep courses, scheduled his test and passed mightily when he became an official Journeyman Plumber.

Not long thereafter, Juan received a letter from AAA AUGER Plumbing Services that introduced him to the company. Juan was impressed with the longevity of the company and all of the benefits that were offered. He decided to meet with management and it didn’t take long for him to jump on board.

When asked about what he likes about his career with AAA AUGER, he stated, “AAA AUGER is not just any plumbing company, it’s a family that takes care of each other. Now I am very comfortable and happy to work for the best company a plumber can work for and that is AAA AUGER Plumbing Services.”

Juan is happily married with children.

Juan, we sincerely appreciate you! Thanks for joining the team.