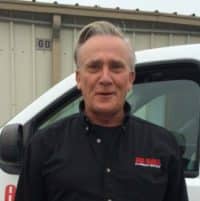 Ernest was born in Villa Rica, a very small town in Georgia. At age eleven, he started plumbing with his father where he learned all facets of plumbing. From joining cast iron pipe with lead and oakum, installing copper runs throughout multistoried buildings to cutting and threading steel pipe and reading blueprints, there was little that Ernie did not learn.

At the age of 21, Ernie joined the Army. During his career he was deployed to Hawaii, Germany, and Iraq (where he received the Bronze Star Metal). Between deployments, he was a member of the “All Army Rifle Team” out of Fort Benning, Georgia. He is also a graduate of the United States Sergeants Major Academy located in Ft. Bliss, Texas where he honed his operational and personnel management skills.

Ernie retired from the Army in 1995 and then resumed his plumbing career. After getting his Journeyman’s license, he worked at Ft. Hood, Texas maintaining base housing. In 1998, He joined the AAA AUGER Plumbing Services team and after earning his Master’s license, became the Responsible Master Plumber for the San Antonio Branch.

In 2002, Ernie followed his dream and started his own plumbing company. He successfully operated his company for nine years but chose to shut it down. In November of 2011, he rejoined AAA AUGER and operated one of our service departments. In July of 2015, Ernie filled the Quality Control/Field Trainer position.

Ernie is happily married to his wife Becky with whom he has three boys. Christopher serves on the SWAT Team of the Marietta, Georgia Police Department; Ernest Jr. is an ATI Technician in San Antonio and Andrew works at the Baptist Hospital in downtown San Antonio.

When Ernie isn’t leading the troops in the field at AAA AUGER, he loves to play golf, enjoys fishing and competitive shooting.

We are fortunate to have Ernie on our Team. His expertise, commitment to service and attention to detail have made him one of the main “Go-to-Guys!”