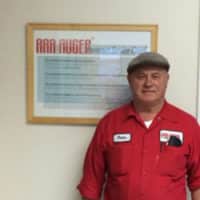 Peter Holmes has been part of the AAA AUGER Plumbing Services team since 2001. Peter was born and raised in Lancaster, England where he was a truck driver and also owned a driving school.

In January of 1989, Peter moved to the United States and began working in the plumbing industry. He managed plumbing companies in both Florida and Georgia before moving to Texas where he began working for AAA AUGER in September of 2001. In 2007, Peter earned his Master’s License and has served as a mentor to our younger plumbers.

When he is not at work, Peter enjoys going to concerts, plays, and trying out different restaurants in the area. He recently got to meet the band Journey at a concert at the WinStar Casino in Oklahoma.

Peter says that what he likes best about AAA AUGER is the camaraderie of our team. He also said that one of the main things that drew him to AAA AUGER and has kept him here so long is David Cross’s approach to taking care of our customers. He elaborated that all companies are going to mess up from time to time, but he loves the fact that he works for a company that sincerely takes responsibility for their actions and goes above and beyond to achieve customer satisfaction. Good companies take care of their customers AND their employees, and AAA AUGER does both very well.

Peter has been a blessing for AAA AUGER Plumbing Services as he has taught us quite a bit. He is the consummate professional and a customer favorite.

Peter Holmes is yet another example of what makes AAA AUGER Plumbing Services your “Go-to Guys!”