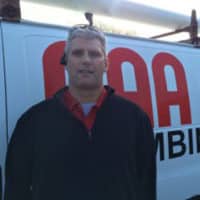 Jaime Smith has worked with AAA AUGER Plumbing Services since January 2013. He is a Master Plumber (license #M-38142) and a Backflow Preventer Assembly Tester (license #BPAT00016492).

Jaime has more than twenty years experience in the plumbing trade as a repair plumber. His introduction to the plumbing trade was as an apprentice installing drain waste and vent, potable water and chiller water systems for the construction of the Samsung computer chip plant in Austin, Texas. Jaime also installed underground sanitary drainage for the Austin Bergstrom Airport during its construction.

After moving to San Antonio, Jaime was trained in pressure washer piping systems while installing the pressure washing system at Sea World of San Antonio. After testing for and receiving his journeyman plumber license, he began a career in service plumbing, and attended classes in water heater repair, testing and diagnostics. He continued his trade education and went on to pursue and receive the master plumber license, backflow tester license, and certifications for flexible gas and potable water piping installer.

Before becoming beginning a career in plumbing, Jaime served as a paratrooper in the U.S. Army, where he learned motivation and dedication, and worked at Mt. Rushmore in South Dakota, where he attended the Walt Disney customer service course.

Jaime is committed to AAA AUGER Plumbing Services, our customers and ensuring their health and safety, as well as the safety of the apprentices he trains.

Although Jaime studied chemistry at the college at the South Dakota School of Mines and Technology, When asked, he will tell you that he prefers plumbing; and he quotes Albert Einstein,”If I would be a young man again and had to decide how to make my living, I would not try to become a scientist or scholar or teacher. I would rather choose to be a plumber in the hope to find that modest degree of independence still available under present circumstances.”

“I have the benefit of working for a company that gives me the independence and the opportunity to use my training and skills to help real people, and to do it at the highest level possible. That way, I have a high degree of job satisfaction and can sleep at night with a clear consciense. Unless there is an emergency call at 1 a.m. Then I do the call, and sleep with a clear conscience later.” – Jaime Smith

Jaime is the consummate professional. He yearns for knowledge and take enormous pride in everything he does. Jaime, is undoubtedly, one of “the Go-to-Guys!”.