It is a licensed plumber’s mission “to protect the health of the Nation."

Protecting You From Cross Contamination

One of the most significant advances in modern plumbing has been due to the awareness of protecting fresh water sources from cross contamination and back flow.

Cross contamination occurs when any non-potable or hazardous liquid comes in contact with our fresh water supply. Examples include sewage or hazardous material dumped into a lake, pond or reservoir, or even fertilizers or other chemicals that seep into our water supply through sprinkler heads and irrigation systems.

Prevention of cross contamination is important for the health of your home, business, and community. Nobody should dump sewage or hazardous material into our fresh water, and individuals, families, and businesses should do everything they can to keep toxic substances from finding their way back into the plumbing system. Please see Backflow Preventers for more details. 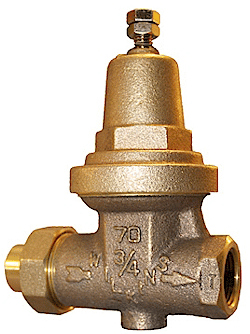 Most current plumbing codes specify 80 psi as the maximum pressure at which your potable water system may safely operate. AAA AUGER Plumbing Services ® technicians are trained to provide water pressure tests to every home free of charge. Excessive water pressure can cause many problems to include ruptures in both supply lines and faucet packings (seals, o-rings, etc.) and the bursting of hot water tanks.

There are many factors that can affect water pressure, either positively or negatively. Increased water pressure usually occurs when a pump from the municipal water source has been upgraded due to increased demand. Often, in growing communities, additional water towers are built which will result in increased pressure.

How is excessive water pressure addressed?

Whenever pressures are discovered to be over 80 psi, a Pressure Reducing Valve (P.R.V.) or similar mechanical regulator should be installed. The regulator will ensure that, beyond the point of installation, the water pressure will never exceed the safe limit.

Note: A Pressure Reducing Valve may negatively affect the performance of an irrigation system. Installing the regulator beyond the irrigation system’s tie into the water supply will prevent such problems. Also, when installing a P.R.V., the system becomes a “closed” system. Please see the Thermal Expansion section for more information.

Plumbing codes require that expansion tanks be used whenever a potable water system contains a Pressure Reducing Valve (PRV), a Backflow Preventer or a double check valve. When water flow is static or not flowing through the system, the aforementioned valves are closed which prevents water from reversing its intended course. This is referred to as a “closed system”.

Water, when heated, expands. The expansion increases its volume. For example, water heated from 90ºF to 140ºF in a 40 gallon water heater will expand by almost one-half gallon. Because water is not compressible, in closed systems, the increased water volume must go somewhere. This thermal expansion increases water pressure. Since pressure seeks the path of least resistance, annoying and potentially dangerous problems can occur. In an “open system” or a system that does not contain the aforementioned valves, the increased volume is able to find its way back into the municipal supply.

More serious problems can also occur due to thermal expansion. When pressures within a water heater surpass the intended operating range, internal parts may fail such as internal flues, fittings or water connections. If a flue way collapses it can lead to the potential release of toxic gases, such as carbon monoxide into living spaces. Thermal expansion can also cause the water heater’s tank to rupture or explode. Minimally, this may require replacing the heater. However, there are many documented incidents that have caused major property damage and fatality.